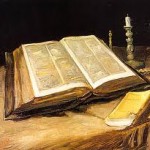 In the second chapter of Revelation, Jesus made a remarkable complaint against the congregation at Ephesus. “Nevertheless I have this against you”, He lamented, “that you have left your first love.”

Before we explore that complaint, however, let’s look back for a moment.

In about 95 AD, while imprisoned on the Isle of Patmos, the Apostle John was approached by Jesus and instructed to record the Revelation. Moreover, Jesus told John that the Revelation would consist of three parts, including one portion devoted to the Church comprised of seven letters to seven congregations.

The seven letters are recorded in Chapters two and three, and are particularly noteworthy because they are as relevant today as they were in John’s time.

Yes, Jesus addresses issues appropriate to those particular congregations, but at the same time can also apply to all congregations, and even more, to all individuals. In other words, when Jesus ascribed His knowledge of these congregations’ works and condition (good or bad) in the first century, He was also speaking to you and me in the twenty first century.

We must, therefore, explore each letter and therein embrace each praise and rebuke, encouragement and hope, despair and delight. Bearing in mind, that our Lord continues to move about the Church, watchful to guard against internal and external evils and mindful to rightly preserve its spiritual well-being as steadfastly today as yesterday.

Okay, with that in mind, let’s consider this letter to Ephesus and see whether it strikes a chord and perhaps intends to admonish us.

“I know your works, your labor, your patience, and that you cannot bear those who are evil”, Jesus said. “And you have tested those who say they are apostles and are not, and have found them liars; and you have persevered and have patience, and have labored for My name’s sake and have not become weary” (vs. 2-4)

Foremost, we must notice the good works attributed to the Ephesians lest we consider ourselves above reproach and ignore the admonition. This is not a lazy congregation devoid of church service; the works of the Ephesians were admirable. “Nevertheless,” Jesus said, “I have this against you, that you have left your first love”.

What does Jesus mean?

The love in question is the “early love” of the congregation. That first enthusiastically warm and affectionate love following a new life in Christ, where self is denied, all that displeases God is gladly abandoned, and fellowship one with another is joyfully embraced. In other words, despite commendable devotion to the Word of God, the members had strayed from sincerity; or as one commentator puts it, “members were going through the motions without emotion”.

Has that happened to you?

Do you attend church services out of obligation or a force of habit rather than a passionate desire to worship God (as you did in the beginning)? And has your fellowship (where your earlier heart was tender for one another) become argumentative and divisive?

If so, confess that condition to God right now and return to your first love. He loves you as a bridegroom loves his bride, and not unlike the members at Ephesus, is admonishing you because He desires you.